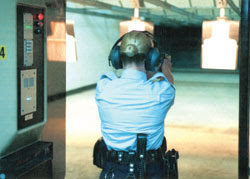 I finished reading Blink a couple of weeks ago and the anecdotes keep on coming back to me all the time. The book has several support stories for the author’s arguments and in general they are very well constructed. There is one in especial that is closely related to software development. It is the one that talks about how police officers get into a state of momentary autism on situations of extreme pressure. Far from me saying that software developers are under the gun in the same fashion as police people, but there are similarities.

In the book Gladwell discusses why highly trained professionals can bluntly fail to recognize true danger. The most probable reason is that once inside of complex situations the human mind tends to fail intercepting external stimuli. He suggests that a way to avoid getting caught on such mind blanking traps is to repeat safety steps. Most people can handle complex situations but few know how to avoid creating them in the first place. In software production, frequent codebase commits and updates, rigorous test writing (preferably in TDD way) and the use a continuous fast build are as important as keeping a gun away from suspects or holding the torch with the weak hand. If the process provides safety use it always.

In his research Gladwell found that police officers working in pairs do things differently than those working alone. Actually partners tend to speed up when working together. For the police speed can be bad because failing to correctly interpret signals in life threatening situations may be disastrous. Software, on the other hand, needs to be produced quickly, so let’s pair. Developers working together are more confident and like police officers tend to be bolder and charge more. It's a pity that police doesn’t have test frameworks to find out if the suspect was holding a gun or a wallet by the time they decided to open fire.

The autistic condition reported by officers has striking resemblance with the business blindness that plagues developers. Officers say that the fear of gunfire is such that they react without considering external factors. They are trained gunmen but the last thing they want is to fire a gun. Don’t go on writing code unless you know it has business value. It is every developer’s job to challenge requirements for purpose and need. Don’t allow yourself into a condition where everything is self-justified. Don’t use your experience to simply write more code instead make sure that every line delivers value.